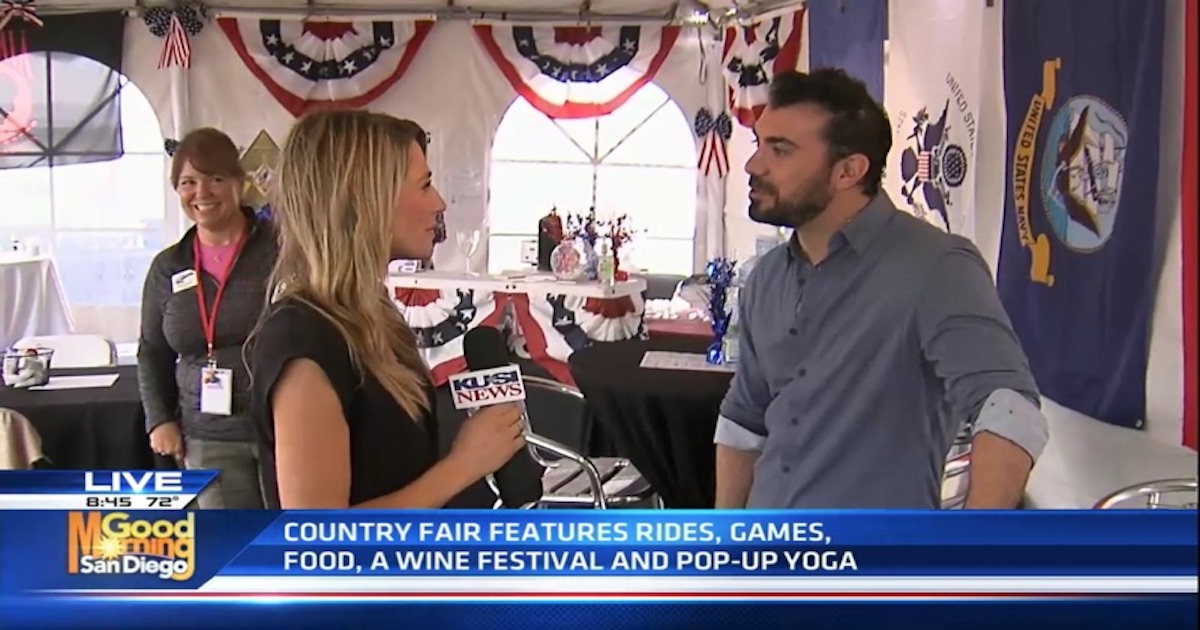 On the morning of August 26th, I had a TV appearance on Good Morning San Diego, for my hypnosis show at the Ramona County Fair the night before.

On the morning of August 26th, I had a TV appearance on Good Morning San Diego, for my hypnosis show at the Ramona County Fair the night before. I got an email just days before saying, that local News station, KUSI will be on the grounds to film a segment about the Ramona Fair at 6:45 A.M. I contemplated not being there because I didn't really know if I would get the air time I was promised and it's not exactly around the corner. Especially considering the day before I just drove back from Arizona where I was performing a College Hypnosis show THEN, drove up to Ramona to perform a Hypnosis show for the fair, after only 4 hours of sleep!  But when I thought about it, I thought this would be a fantastic opportunity being a San Diego Magician. So you better believe, I woke up super early and drove nearly an hour North East to meet up with KUSI. I had no idea what was going to go down. But when I first arrived, I saw the KUSI van and immediately got excited!

When I got there, I met the lady who hired me and she immediately introduced me to the Anchor, Dani, and the Cameraman, Jason. Both were extremely nice and made me feel so comfortable! They filmed a teaser in which I produced an Ace production. After that, I was supposed to be on the first segment, along with a musician who was playing the guitar. After they filmed him, they cut and that portion was done! I was definitely thrown back, because I thought that was it, my chance was done and they were going to move on. But they assured me I could go on and do the next segment, which was all mine.

So here it was, the word "action" was yelled and from here on out, it was all live filming! Which was the scariest part of off of this, that it was LIVE. I had ONE chance, and if I messed up, everyone would've seen it! It was broadcast all across San Diego. And the other thing was, I would have been embarrassed to post the video, as that would be across the entire internet and EVERYONE would know that I messed up. Fortunately, EVERYTHING went to plan!! I had no idea what they were going to ask me or how many effects I would be able to do. However, the question they did ask me, I was thrown off guard because it was a tough one, they asked, "what does it mean to be the BEST Magician?" I won't tell you my response, but I think I did in fact give a really nice answer.

From there, we were on to the Magic. I produced 3 Silver coins, defied gravity, with a coin, vanished a coin and caused it to appear on the anchor's hand, and Magically took a sharpie marking off my hand, and onto Dani's hand! From there, I was able to talk about where I perform locally on a regular basis. Enough talk from me, check out the link below to watch the clip of your premiere San Diego Magician!